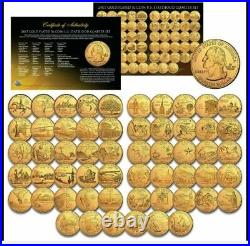 24K GOLD Plated 56-Coin Set. Launched in 1999, the United States 50 State Quarters Program was a 10-year initiative that honored each of the nation's states in the order that they ratified the Constitution or were admitted into the Union. The 2009 DC and US Territories 6 Quarters U.

Each quarter was produced for about 10 weeks and never produced again. Here is your chance to own a complete set of fifty-six (56) beautifully 24K Gold plated United States Statehood/DC and US Territories Quarters Coins featuring all 50 states and the 6 DC/US Territories. Each coin is beautifully enhanced on the reverse in permanent 24K Gold plating by the Merrick Mint to highlight the original design using a unique colorizing process, which involves the application of full 24K gold plating directly to the surface of a coin.

The result is an everlasting coin collectible of ultra-high quality that is #1 in the industry. Each coin features a unique state/DC/territory design on the reverse and a common obverse with portrait of George Washington.

Each coin is genuine legal tender of the United States and comes in an acrylic coin holder and includes a Certificate of Authenticity. The State Quarters Program was the most popular commemorative coin program in United States history. Each Coin is Handsomely Showcased in an Acrylic Coin Capsule.

Please note that these are Genuine Legal Tender U. This item is in the category "Coins & Paper Money\Coins: US\Quarters\State Quarters (1999-2008)". The seller is "darinman2012" and is located in this country: US. This item can be shipped to United States.