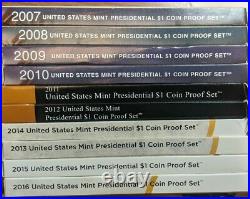 Presidential Dollars issued from 2012 to 2016 were struck only for collectors and not released into circulation. Although they look like standard coins, they are special editions that are different from coins you will find in circulation.

Each coin is in its original Mint Proof condition. The list includes coins from the following years. 2007 : George Washington, John Adams, Thomas Jefferson and James Madison.

2013 : William McKinley, Theodore Roosevelt, William Howard Taft and Woodrow Wilson. 2014 : Warren Harding, Calvin Coolidge, Herbert Hoover and Franklin D Roosevelt. 2015 : Harry Truman, Dwight Eisenhower, John F Kennedy and Lyndon B Johnson. Each coin is encapsulated to protect its finish and is in its original US Mint sealed case with the original box and each year's COA.