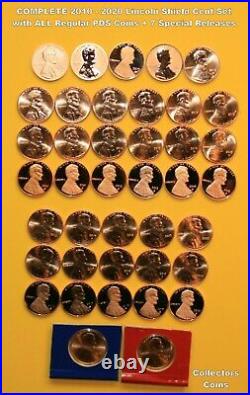 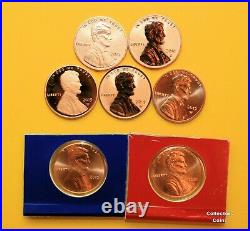 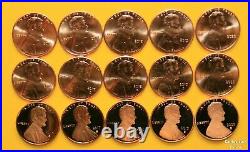 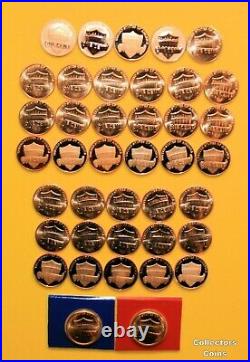 There are a number of interesting coins in this set including. 1 The 2010 "P" & "D" Satin Cents. These two coins are the only "satin" strike Lincoln Shield coins the mint has released to date (there were satin "Memorial" and "Bicentennial" cents released from 2005 - 2009 as well but these are not "Shield" cents). Satin coinage was included in the 2005 through 2010 mint sets in lieu of regular business strike coins.

Prior to 2005 and after 2010 mint sets contained and have contained uncirculated regular business strike coins. Mintages on the US "mint sets" were modest and therefore the "satin" cents relatively scarce. 2 The 2017 "P" cent which includes, for the first time on a Lincoln cent the "P" Mint Mark. It is expected that the "P" will only be seen on the 2017 Philadelphia mint coin and not in the future. 3 The 2017 "Enhanced" Uncirculated "S" coin - In 2017 the mint released a special anniversary set including "enhanced" uncirculated coins.

This set had limited mintage (225,000) and was quite popular. The "Enhanced Uncirculated" cent from 2017 San Francisco anniversary set is included in this set. 4 The 2018 Reverse "S" Proof - In 2018 the mint also released a special anniversary set (this one commemorating 50 years of proof coinage at the San Francisco Mint). 5 The 2019 "W" cents which included a regular proof, reverse proof and business strike coin.

The three "W" (West Point mint) coins released in 2019 were the first and thus far only "W" cents released by the US mint. They were individually included as "bonus" coins in the US Clad proof sets, US Silver proof sets and US Mint sets, respectively. With the limited mintage these coins are also already relatively pricey.

This item is in the category "Coins & Paper Money\Coins\ US\Small Cents\Lincoln Shield (2010-Now)". The seller is "86coins" and is located in Lake Oswego, Oregon.