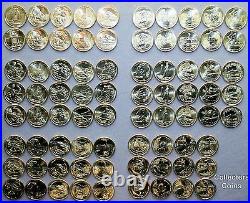 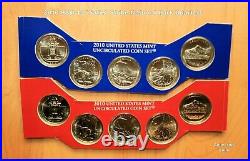 In addition to the 158 business or circulation strike quarters released to date and contained in this set, there are 10 "satin" finish coins from 2010 (5 national park designs in 2010 x 2 mints for P & D). Satin finish national park quarters were only minted in 2010 and only available through purchasing mint sets directly from the mint i.

Satin finish quarters were never released into circulation at both Philadelphia and Denver and all the satin finish national park quarters are part of this set. This set therefore contains ALL of the business and satin strike national park quarters in a now complete set. This set ships in 4 inert plastic quarter rolls for the regular business strike coins plus the 10 2010 Satin coins (shown in pictures).

I sell a lot of these sets (>425) as they are nice and reasonably priced. Recent feedback I have received from these coin sets includes. Lightning fast and great item. We're very pleased with the set. The pictures I have posted, because of lighting, may appear to some to have a golden tinge to them.

However, these are regular clad quarters and are silver in color. Below are the coins included in this set. Hot Springs National Park Quarter P&D.