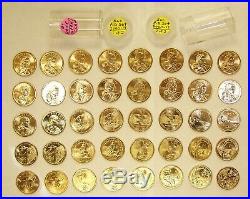 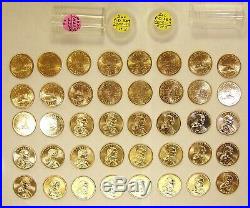 This listing is for one (1) or more complete'P-D Sets' of Uncirculated Sacagawea / Native American golden-colored dollar coins from their first year of issue in 2000 through the current year (2019), like the set pictured. Each set contains a total of 40 coins, which is two coins from each year to date: one coin from the Philadelphia Mint and one coin from the Denver Mint, for each year. The coins are stored in inert plastic tubes for protection. It is important to note that Sacagawea dollars were released into circulation in only a few years of their production: the vast majority of these coins had to be special-ordered from the Mint in the year they were produced. In simple terms, what that means is that it is a practical impossibility to find these coins at your local bank and assemble a complete set on your own. And the mintages on many of these coins are low, low, low..

A little history on these, in case you are not familiar with them. Government issued our first golden-colored (but not real gold) small-size dollar coins in 2000. The coins are not made of real gold, but have a similar color due to their special composition and manganese brass plating. The coins were issued to honor Native Americans and their contributions to our society. These were called'Sacagawea' dollars because the obverse of the coins bears the likeness of Sacagawea, the Shoshone Indian woman who served as a guide and interpreter for Lewis and Clark during their exploration of the western U.

But since the obverse design is basically the same as used from 2000 through 2008, many people (including myself) simply refer to them all as'Sacagawea' dollars. Since I did not number and photograph each set separately, you probably will not receive the EXACT coins pictured.

However, you will receive coins pulled from the same original rolls or bags, so your coins will look pretty much like those pictured. It should be easy enough to wash or replace the coin tubes if you can tell and it bothers you --- but to each his own. Up until the last 15 to 20 years or so, smoking was not "taboo" in our society and any coin older than that has certainly been exposed.

However, it is not possible to avoid their exposure entirely --- and that effort does not apply at all to my packing materials. Thank you for your interest, and hopefully your patronage! The item "Complete 2000-2019 Uncirculated P-D Set of Sacagawea / Native American Dollars" is in sale since Wednesday, April 3, 2019. This item is in the category "Coins & Paper Money\Coins\ US\Dollars\Native American (2000-Now)".

The seller is "garmstrong6567" and is located in Leeds, Alabama. This item can be shipped to United States.