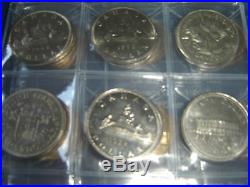 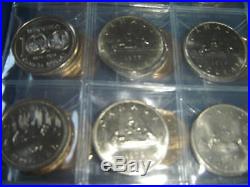 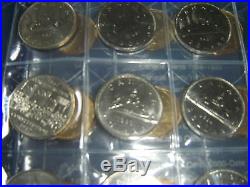 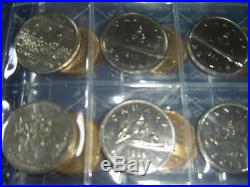 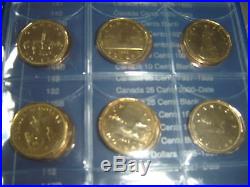 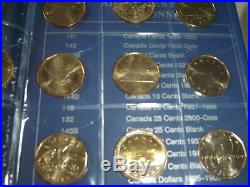 You are looking at a Complete Set of Canada Dollars from 1968 to 2010 (46 Coins). All these Coins are in UNI-SAFE coins folder.

This dollar coin commemorates the entry of Manitoba (Province of Canada) into Confederation in 1870. Its design is based on the flower called.

(Province of Canada) into Confederation in 1873. Its design is based on Provincial Legislature Building. This dollar coin commemorates the centenary of the city of Winnipeg (Capital of Manitoba, Province of Canada). Its design consists of a large'100'; in the first'0' of'100' is a view of Main street in 1874 and in the 2nd'0' is a view of same location 100 years later in 1974.

This Coin depicts the War Memorial on its Reverse. War Memorial was built to commemorate the participation of Canada in WW I and then it was rededicated in 1982 to include the Veterans of WW II and Korean War. This Coin commemorates Canada's Commitment to World Peace and the 50th Anniversary of the founding of United Nations.

The design features the PeaceKeeping Monument in Ottawa, unveiled in 1992. The peacekeeping monument is the only monument of its kind in the world.

2004, 2006 and 2008 Olympic Lucky Loonies. The Royal Canadian Mint is proud to issue this specially designed Lucky Loonie to celebrate a Canadian Olympic story and to wish all of our Canadian athletes the very best of luck in Olympic Games. Canadian hero, Terry Fox, lost his leg to cancer at the age of 18. On April 12, 1980, Terry Fox set out to make his dream of a cancer-free tomorrow.

On the 25th anniversary the Royal Canadian Mint issued a special one-dollar coin. While Terry is no longer with us, his legacy lives on in Terry Fox Runs held around the world every year.

This item is in the category "Coins & Paper Money\Coins\ Canada\Dollars". The seller is "coins_collector" and is located in Windsor, ON. This item can be shipped worldwide.