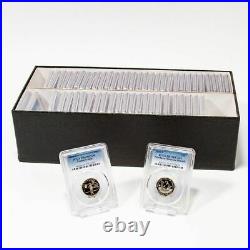 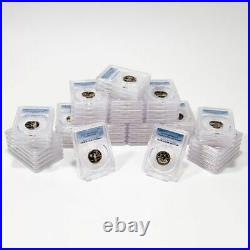 In 1997, President Bill Clinton signed the 50 State Commemorative Coin Program Act. This act aimed to reinvigorate the hobby of numismatics by commemorating each and every state with its own unique quarter design. The success of the State Quarter Program was so tremendous, that in 2009, the program was extended to include the 6 U. The obverse of each of these 56 quarters showcases a specifically tailored design that is emblematic of a state or territory`s unique history, traditions, and symbols.

The 50 State Quarters in this set are all struck at the San Francisco Mint and are graded in Proof 69 Deep Cameo condition. These clad Proof quarters were struck in much lower numbers than circulation state quarters struck at Philadelphia or Denver which makes them significantly rarer to come across. A complete set of State Quarters is a truly impressive addition to any collection.